A Woman’s Dress and Adornment 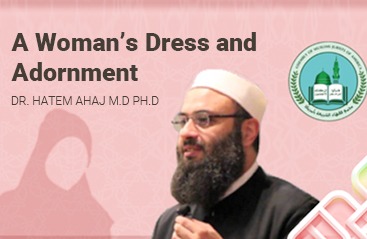 In the name of Allah, the Most Merciful, the Grantor of Mercy. All praise is due to Allah, and may salutations and peace be upon the seal of His Messengers and His most cherished slave, and upon his family and companions.

The issue of a woman’s dress code and adornment has been the center of much controversy, where debates and even accusations frequently arise. The duty here is to handle this subject with sincerity and objectivity, while remaining keen to uphold the values our Sharia lays down for a Muslim society, such as dignity, chastity, and modesty. At the same time, we must avoid violating the Sharia itself via an overly strict reading of the Qur’an and Sunnah, or via advocating excessive precautionary measures that would distance us from the ideal society that existed in the city of the Prophet (saws) during his life.

Beauty and Adornment in Islam

Beauty, beautification, adornment, and cleanliness are part of the fitrah (innate disposition) which Allah disposed those of sound nature upon, and no religion out there has encouraged purity and beauty as Islam did. For instance, Allah (st) says, “O Children of Adam, take your adornment at every masjid,” [al-A‘râf: 31] and says elsewhere regarding cattle, “And for you in them is [the enjoyment of] beauty when you bring them in [for the evening] and when you send them out [to pasture].” [an-Nahl: 6] Notice how He did not only mention the other benefits it provides, but included His favor upon His slaves in terms of the beauty He endowed therein.

Likewise, the Prophet (saws) said, “Purification is half of faith,” and “Indeed, Allah is beautiful and loves beauty,” and “Whoever has hair, let him honor it.”

Beauty and adornment can be considered an inborn need when it comes to women, as the Most High says, “So is one brought up in ornaments while being during conflict indistinct [attributed to Allah]?” [az-Zukhruf: 18] Likewise, we find the Prophet (saws) deeming gold and silk forbidden for men, but permitting them for women, and find him especially stressing the importance of a woman’s beautification for her husband. However, some aspects of a woman’s adornment are only lawful for her husband, some are only lawful for her mahram relatives and fellow women, some are lawful in every situation, and some are disliked or unlawful in any situation. The issue of a woman’s adornment is certainly great, due to what negligence towards it can trigger of corruption, and for that reason the Prophet (saws) went as far as stipulating from those pledging allegiance to renounce tabarruj (immodest display of adornment) as part of their pledge!

General Guidelines for Clothing and Adornment

In Islam, the hijab (veil) is not merely a garment, but rather a complete lifestyle in terms of how she deals with the male gender. A Muslim woman distances herself from suspicion, does not speak in a tone that makes the diseased at heart hopeful, does not sway the hearts of men by swaying in her stride, and is keen to not mix with them except for a need. But when hijab became culture, and when the point behind it disappeared from the minds of our daughters, and when we lost sight of it being a means to achieving chastity and respect, its effect was lost. It is mindboggling to see a young woman with hijab that flirts with men or softens her voice when Allah (st) says, “If you fear Allah, then do not be soft in speech [to men], lest he in whose heart is disease should covet, but speak with appropriate speech.” [al-Ahzab: 32] It is baffling to find her covering her head while seeking to uncover her legs, or arms, or more, or to find her crowding with men in tight places where their bodies collide.

The following are some general guidelines for clothing and adornment:

I – Guidelines for Clothing

The stronger position is that the style of hijab is left for the woman, given that she abides by the aforementioned guidelines. According to the correct position, which is the view of the majority, she is not obligated to wear the “jilbab” in particular, especially when its very definition is widely debated. As for its explicit mention in Surat al-Ahzâb, that is because of how common it was among those women; may Allah be pleased with them.

Based on that, perhaps a woman can wear wide pants if above them is a long shirt that conceals her body to the knees or lower. But if the pants are tight and the over-garment is short, this cannot be permissible because it defines her body and her most private parts. Ideally, a woman who doesn’t wear the jilbab should choose to wear an over-garment that reaches her knees, with a skirt beneath it.

The khimâr (head covering) is whatever covers the head, and the Qur’an adds that it should cover the chest opening as well.

Most of a woman’s adornment should only be displayed in front of her mahram relatives, and certain aspects of it can only appear to her husband, as Allah (st) instructs in Surat an-Noor. As for the exception in the verses of “what ordinarily appears thereof,” most of the narrations from the Companions agreed with the statement of Ibn ‘Abbâs (ra), namely that this refers to the hands and the ‘kohl’ eyeliner. Even the narration from Ibn Mas‘ood (ra) that says it refers to clothing does not necessary contradict that.

The following are some guidelines particular to the issue of adornment:

Applying nail-polish is permissible, for it is analogous to dye, unless the woman is currently praying. In that case, it would be unlawful because it prevents the water from reaching beneath it during wudu’ (ablution) and ghusl (ritual bathing).

Reddening the lips and cheeks is permissible for the married and unmarried, but only in front of her mahram relatives, and while observing the aforementioned condition of not being wasteful.

There is more leniency when it comes to a woman using kohl (eye makeup), khidâb (hand makeup), rings, and other similar adornments, especially for those single and seeking marriage. This is founded by the Prophet (saws) tacitly approving when Subay‘ah (ra) had beautified herself for the suitors once her ‘iddah (waiting period) had ended.

And may the peace and salutations of Allah be upon our Prophet, Muhammad. 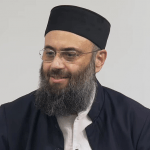