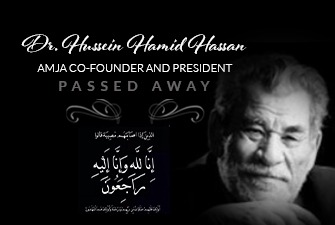 Inna lillaahi wa inna ilayhi raaji’oon. It is with great sadness and heavy hearts that we write to inform you of the passing of his Honor, our dear mentor and honorable co-founder, Dr. Hussein Hamid Hassan, President and Chairman of the Board of AMJA.

As many of you know, Dr. Hussein is considered as the father of Islamic finance. He received his PhD from the faculty of Sharia at Al Azhar University in Cairo in 1965. He also earned two degrees in law from the International Institute of Comparative Law, at New York University. He chaired the Sharia Supervisory Committee of many Islamic banks in the Middle East, and has advised several governments on Islamic finance.

As a legal expert, he had been the Attorney General for the government of Egypt from 1969 to 1970. He advised several governments in the Middle East and CIS countries on the establishment of Islamic finance institutions. Dr Hussain Hassan used to say, “Islamic financing is the most equitable form of financing, since it enables the creation of wealth without fueling inflation or stoking a financial crisis.” Allah says,

{He [Allah] grants wisdom to whom He pleases; and he to whom wisdom is granted indeed receives a
benefit overflowing. But none will grasp the Message except men of understanding.} [Al-Baqarah 2:269]

{…Say: Are those equal, those who know and those who do not know? It is those who are endued with understanding that remember (Allah&#39;s Message).} [Al-Zumar 39:9]

{…Allah will raise up to (suitable) ranks (and degrees) those of you who believe and who have been granted knowledge.} [Al-Mujadilah 58:11]

Dr. Hussein indeed has contributed a wealth of knowledge to the Ummah of today. He has also left a great legacy for the future generation. He will be severely missed.

We ask Allah to forgive and have mercy on our dear founder and honored president, and to admit him to the heights of Jannah. We ask Allah also to pour His mercy on the family and community of Dr. Hussain and strengthen their hearts and ease their grief during this difficult time. Ameen.

AMJA Admin has not set their biography yet
Read More