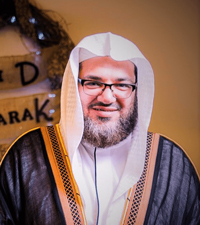 He graduated with a Bachelor’s in Islamic Sciences from Al-Imam Muhammad University, KSA; did his Masters in Islamic Theology, World Religions and Modern Religious Sects from Al-Imam Muhammad University; and acquired a Doctorate in Theology. Shaykh Waleed has Ijaazahs in reciting the Holy Qur’an and in several books of Hadeeth, awarded by various scholars. He studied under great scholars of our time such as Shaykh Ibn Baz, Abdul-Razzaq Afify and others.

Shaykh Waleed Basyouni has made an appearance in media around the world including Al-Huda Channel, Islam Channel, PeaceTV, and many other radio talk shows and television programs in both the English and Arabic languages. He is also a member of the North American Imam Federation (NAIF), Assembly of Muslim Jurists in America (AMJA)-Fatwa and Research Committee, Director of Texas Dawah Convention, and Advisor to numerous Islamic Societies/Organizations around the US.

Some of the publications by the shaykh:

Back to Fatwa Committee