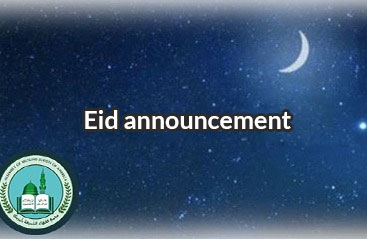 In the Name of Allah the Most Merciful, the Grantor of Mercy

All praise is due to Allah, and may His peace and blessings be upon the Messenger of Allah.

The Assembly of Muslim Jurists of America (AMJA) congratulates Muslims throughout the world, and specifically in the US, on the arrival of Eid al-Fitr and announces the following:

Tomorrow, Tuesday June 4, 2019 will be Eid al-Fitr. This is due to the affirmation of the legal beginning of the new month in Saudi Arabia and Qatar. Many other Islamic countries have acted upon this as well. As outlined in previous fatwas and declarations, AMJA adopts the global sighting position. Whenever the crescent has been sighted in any country and calculations do not indicate that it could not have been seen due to the moon not being born yet, then the new month begins for all those who share a portion of the night with the country that sighted it.

We had previously announced that it would not be possible to see the crescent. However, in accordance with our standing position we would only reject sightings if they occurred before the birth of the moon, and that if the moon has been born then sighting would be accepted due to the differing amongst astronomers over the amount of time needed after the birth for sighting to be possible.

This is our final announcement for the Muslims in America, and as always we respect the differing opinions on this matter.

We pray to Allah to lift the oppression and trials from the entire Muslim nation, to stop the bloodshed, and to fulfill what He promised by saving them and giving them support. May Allah protect mankind from the woes of warfare and guide their leaders to that which is beneficial for all.

Allah is all-knowing of man’s intentions, and He is the one who guides to the straight path.